October 7th is also World Communion Sunday. How do these texts relate? 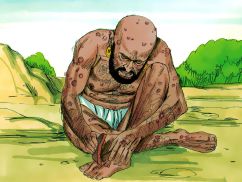 Here is the counterpoint to any popular “prosperity” gospel. Bad things do happen to good people. Here we see the beginning of a morality tale. Let’s not get side-tracked in the detail of ancient storytelling devices (did God really allow himself to be manipulated by Satan into using Job in some sort of cosmic gladiatorial contest?) Here the stage is set for the real contests that life sends our way. There are no slick answers but something precious emerges from the struggle. That’s the message these opening scenes are meant to convey.

Indeed, this might well be Job’s psalm. The poet holds fast to belief in the hold of his integrity against adversity and trusts the Holy One to be faithful even when all evidence of such faithfulness is hidden.

The anonymous letter to the Hebrews begins with a majestic announcement of the fulfilling role of Christ as the climax of the series of seers and prophets anointed to speak God’s Word to Creation. The later Hebrew cosmology of angels is used as a comparison to the glory to which humanity is called through the sacrifice of the Christ. Voices from early times onwards have called for the separation of Old and New Testaments and Hebrew imagery from Christian teaching, but this would amount to historical revisionism. We need to know and embrace our full story, especially those episodes that are beyond our cultural understanding. The New Testament is replete with imagery from the crucible of Judaism and is instructive in how its expression reached beyond the faith of Israel to embrace the whole cosmos.

This passage has recently been used as a bludgeon in the same-sex marriage debates. The context reveals that Jesus was opposing the patriarchal concept of women and children as chattels, easily disposed of with a ticket of divorce. Marriage bonds are sacred in their mutual accountability. In the same breath, you must become like a child to enter the Kingdom of God. With these utterances, Jesus crossed significant cultural boundaries and exposed himself and his followers to increasing risk and danger. 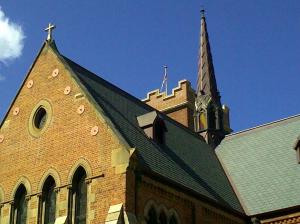 I used a day of leave to experience communion in a tradition quite different to that which I am accustomed, so I took myself off to the 10 am Choral Eucharist at St Georges Cathedral of the Anglican Arch Diocese of Perth, Western Australia.

I have participated in communion services of the higher liturgical traditions before, most notably at our local ecumenical Pentecost services. I was quite looking forward to cathedral pageantry and the sacred music of Bach and Handel. I was not disappointed – on the contrary there were some moments where the sacred took me by surprise.

World Communion Sunday. If you are participating in a communion service somewhere in the world today, may the peace of Christ be with you!