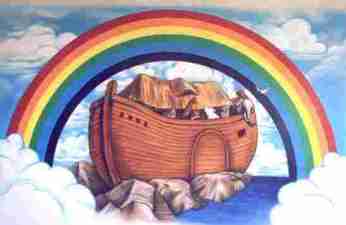 Our daily texts from Revised Common Lectionary are leading into the Season of Lent, commencing this Wednesday. Genesis 9:8-17 is the climactic postlude of the Noah story, where the ancient principle of covenant is introduced. The ark takes its place as a primary point in the Hebrew view of the “arc of the moral universe.”

A covenant is different from a contract. It speaks of intentionality in fostering a positive relationship, even when the other party fails. Rev’d Dr Mark Hillis refers to the post-diluvian rainbow as a “bow at rest” – a laid down weapon suggesting a conjunction of the spectrum of light and the cessation of G-d’s intervention of punitive wrath.

This foundation of the covenant reveals an early theological understanding that natural disasters are not the punishment of offended gods. Rather there is an assertion of benevolent loving relationship awaiting development. This is an early and dawning awareness; the arc will yet reveal more touch points as it progresses through Hebrew and Christian history. Indeed it is meant to convey the basis of the whole human story – the Source of the Universe is best understood through a relationship that is positive and creative.

2 thoughts on “From arks to arcs”