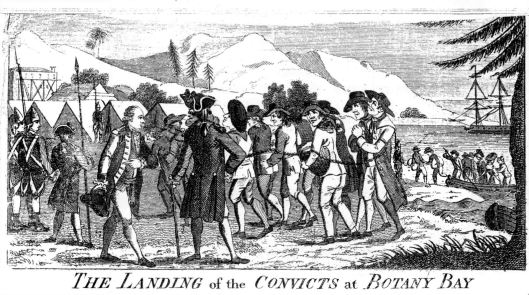 The conqueror will always say “Yes!” and, for support, misappropriate passages like the one set for today (Deuteronomy 18:9-14).

There is a big difference, however, between the cultural and historical context of nation-forging from a horde of liberated Hebrew slaves preserving their fragile identity and colonial expansionism.

It is ironic that such a text emerges on a contentious day that Australia commemorates and celebrates the day the Union Jack was planted on the beach at Botany Bay (oops! Sydney Cove, actually) signalling the commencement of Britain’s new penal settlement. The overseers and convicts arriving on the First Fleet possibly did not see themselves as conquerors – neither did the unrecognised original inhabitants and stewards of the land. The language, attitudes and conflicts of conquest emerged as the needs of the settlement and its economy grew.

Back to Deuteronomy, the need to protect Hebrew identity and possession of land. Here also is a seed of wisdom for multicultural co-existence. The burden of the text is that the Hebrews do not adopt practices that are alien to their identity. The Deuteronomic code continues at length to describe the duty of hospitality and receptivity to those who are “other.” Multiculturalism is not about “making us like them” or “assimilating” the other to be like us. We are to be as comfortable and as confident in our own skin to know that our identity is uniquely formed. From such a base, there is no need for anxiety or defensiveness when faced with the other. We can move beyond tolerance to receptivity, differences and all.