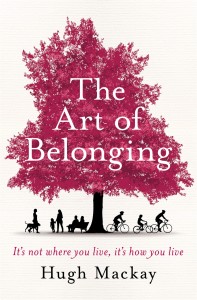 I have always enjoyed the offerings of Hugh Mackay, no less his current title The Art of Belonging, which I have just begun to read. His journal-like writing as a sociologist has always been most accessible.

This work is worth chewing on for anyone remotely involved in community work, especially faith communities. The struggle of the human need to elevate self-autonomy while voluntarily submitting to social cohesion finds many expressions in school canteens, tennis club committees, coffee klatches – and parish councils. I daresay we see the same dynamic alluded to in the New Testament correspondence of the Apostle Paul and his contemporaries.

In discussing the human need for social interaction, even in a highly individualistic culture, Mackay quotes another social analyst, Richard Eckersley, in a sidebar ‘Redefining the Self’ to a paper titled ”Whatever Happened to Western Civilization?” in The Futurist, (November-December 2012).

It has an inviting twist that excites my imagination. Here it is:

One specific example of how a cultural redefinition might take place—encouraging
self-interested, competitive individualists to become, instead, more altruistic and cooperative—is by changing how we construe the self.
When I was at school we were taught that the atom was made up of solid particles,
with electrons whizzing around the nucleus like planets orbiting the sun.
Now, we think of the atom as more like a fuzzy cloud of electrical charges. Similarly,
we currently think of the self as a discrete, biological being with various
needs it seeks to satisfy. Like atoms combining into molecules, we form and dissolve
bonds with other separate selves to create and terminate relationships. Sociologists
talk of modern society as one of “atomized” individuals.

What if we were to see the self not as a separate physical entity, but as a fuzzy
cloud of relational forces and fields? This would be a self of many relationships, inextricably linking us to other people and other things and entities. Some are close
and intense, as in a love affair or within families; some are more distant and diffuse,
as in a sense of community or place or national or ethnic identity; and some
may be more subtle, but still powerful, as in a spiritual connection or a love of nature.
These relationships can wax and wane, vary in intensity and charge (positive or
negative). Importantly, they never end—for example, the break-up of a marriage, or
the death of a parent or child, does not “end” the relationship, but just changes it.
Transforming how we see the self in this way—as a fuzzy cloud of relationships—would
change profoundly how we see our relationships to others and to the world. It would, for example, reduce Western culture’s fear of death, and all that means for well-being. It brings us closer to how indigenous people see the self, and represents one way that scientific and spiritual views can be compatible.
It would alter radically our personal choices and our social and political goals.

It seems to me that this reflects well the “dying to self in order to live abundantly” urge from Jesus. It also reminds me of the “body of Christ” metaphor that Paul employs to plead cohesion amongst the followers of Christ – yet it does not have to be confined to such. This is a Mary moment – something to be pondered.

6 thoughts on “One and All”