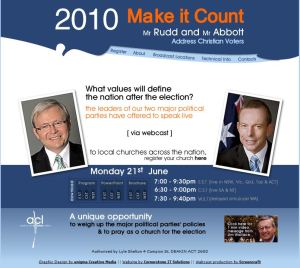 Doubting Thomas strikes again and I am caught on the horns of a dilemma.

As an Easter person, I would dearly love to hear political leaders who also claim to be Easter people spell out the rationale of their party policies and how they line up as practical expressions of the reign of YHWH in a such an eclectic society as ours. I am particularly wary of the way the church can find itself sullied by being chained to party political agendas of both the left and the right. While it is commendable that Christians, more than ever, are exercising a right and a will to be engaged with politics, it is a matter of great concern to me that many do so in a way that is unreflective and unquestioning of the the manipulative strategies of the political machine.

Be “wise as serpents and gentle as doves” Jesus advises us.

It’s best that we lay aside the anachronistic “Christendom” model that many of us erroneously operate under. For all the foundational influence of Christendom, we are not a Christian nation but a secular one. This realisation can free followers of the way of Jesus enormously. Change in society runs deeper through transformation than legislation. We often make the mistake that legislation will lead to the changes in society that we seek. History reveals that legislation serves best when it responds to the transformation of the collective heart. The abolition of slavery as an economic necessity is the oft quoted example.

The church became politically powerful under Constantine, giving rise to the legislative might of Christendom. Many say that this was the beginning of the Church losing its soul. It became fat and lazy, losing the impetus and passion of the frontier movement of God’s realm. Political expediency rather that the “way of light” became the polar star. Those who continued to speak truth into this state of affairs were the social commentators of the time – prophets and contemplatives, men and women who immersed themselves in the silence of the desert in order to discern and hear what the eternal Word was for their contemporary time.

So, I guess I’ll register to hear what the leaders of our two main political parties have to say to us. Both are practicing Christians who have enormous expectations laid upon them by those of Christian faith, other faiths and no faith at all. The practical outcomes of their personal visions often appear to be at enormous variance  with these expectancies. For this reason alone, Christians ought to seek understanding in order to “pray for those who rule over us” more intelligently.

But this isn’t the only thing. Many are the avenues for engagement with the political process. To the degree of our passion, clarity of vision to what and who we are summoned to be, our talents and abilities, societal transformation is within each person’s grasp.