As familiar as many are with the Stations of the Cross, the Stations of the Resurrection are an extension of the story. Here at Wembley Downs we are introducing these Easter points of reflection for the whole Easter season through to ascension Day and Pentecost, adding a new station each week. They will be placed throughout the church buildings. 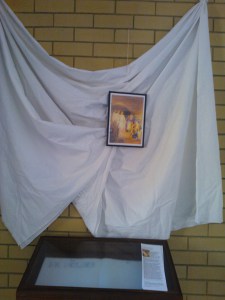 A diminutive portrayal of the three women of Mark’s Gospel account as they meet the young man dressed in white at the empty tomb. The small size of the frame against the white drape illustrates Mark’s uniquely understated account of the event. The women flee, saying nothing to anyone, because they are afraid. So ends Mark’s gospel.

Yet the women were told that Jesus had risen and had gone ahead of them to Galilee (in Mark’s Gospel, the territory of stormy…

Not really retired but reshaped and reshaping. Now a pilgrim at large ready to engage with what each day brings. View more posts